We use cookies on our website. They help us get to know you a little and how you use our website. This helps us provide a more valuable and tailored experience for you and others.

You can revoke cookies at anytime at the bottom of the page.

According to data provided by Aviasales, Russian leading travel search engine, new routes dumped the average booking value up to 42.6 per cent. For instance:

In total, the European LLC operates on six routes from Pulkovo including Budapest and London-Luton.

Aviasales’ experts noted the same price strategy for the service to London. Wizz Air decreased the average booking value twice from €230 to €96 when LCC launched its flights to the UK capital city in October 2019.

Meanwhile, Wizz Air is the low-cost carrier that operates the biggest flight network from Pulkovo airport. In 2019, Wizz Air served over 111,1 thousand passengers at Pulkovo Airport, which is 59.4% more than in 2018. In total, International traffic to Pulkovo increased by 5.4% and amounted to 7,066,167 passengers for the 11 months of 2019. 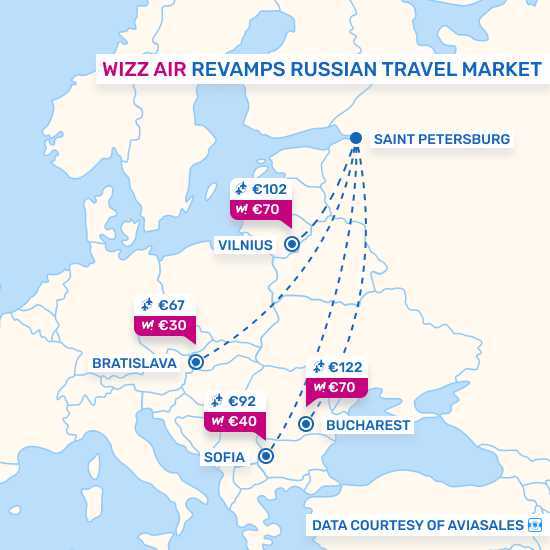 Aviasales is the biggest flights metasearch engine in Russia and CIS. Being founded in 2007 as a private blog, the company has been rapidly growing in Eastern Europe and across the the globe. Helping consumers find cheap flights Aviasales helps airlines & OTA find passengers.